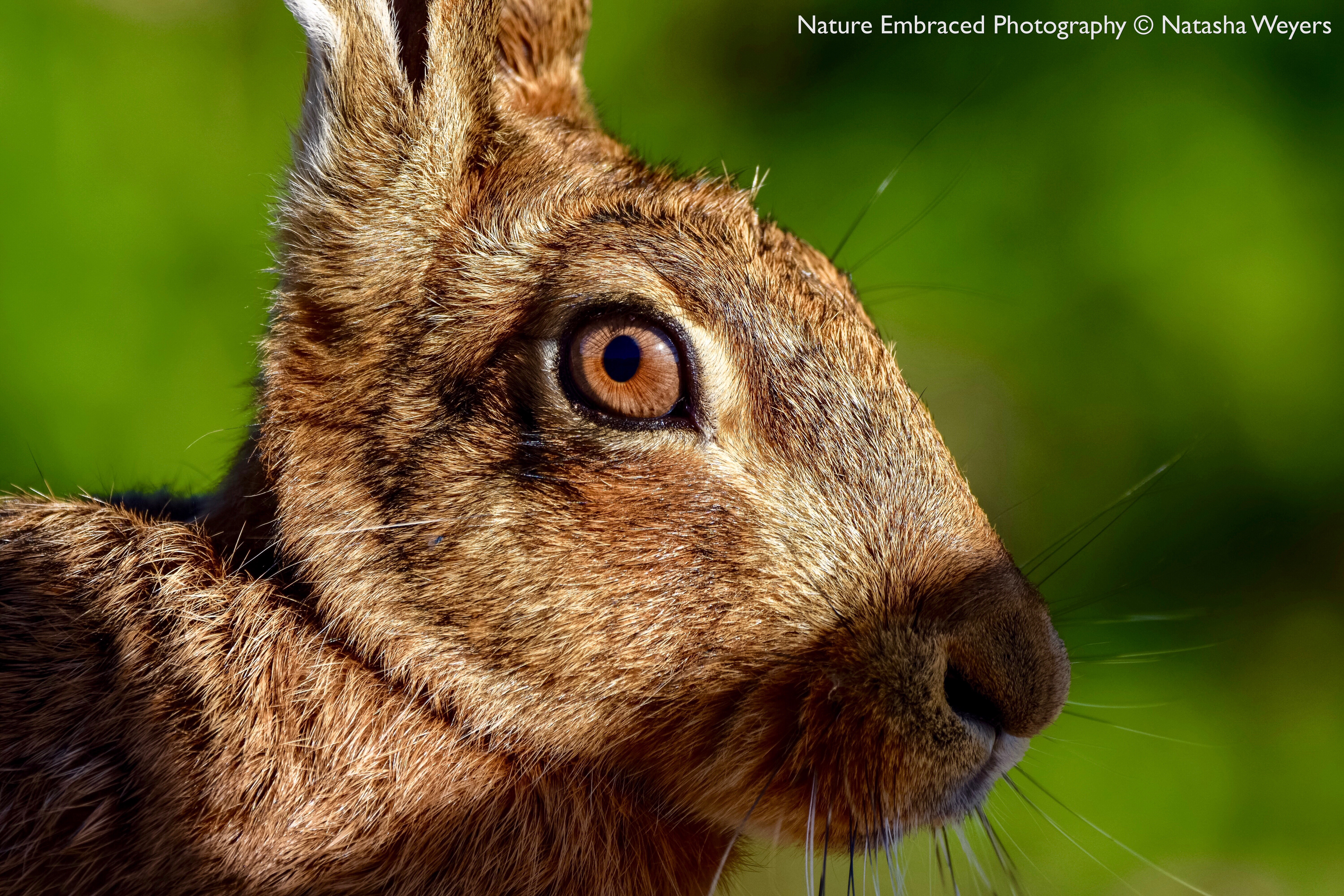 The Brown hare is one of the largest of the lagomorphs. Its head and body length can range from 60 to 75 cm. The Brown hares weight is typically between 3 and 5 kg The hare’s elongated ears range from 9.4 to 11.0 cm in length. It also has long hind feet that have a length of between 14 and 16 cm. They are distinguished from other leporids (hares and rabbits) by their longer legs, wider nostrils and active young.

Rabbits live underground in burrows or warrens, while hares live in simple nests above the ground, and usually do not live in groups. Hares are generally larger than rabbits, with longer ears, and have black markings on their fur. Hares have not been domesticated, while rabbits are raised for food and kept as house pets. Hares do not bear their young below ground in a burrow as do other leporids, but rather in a shallow depression or flattened nest of grass called a form. Young hares are adapted to the lack of physical protection, relative to that afforded by a burrow, by being born fully furred and with eyes open. 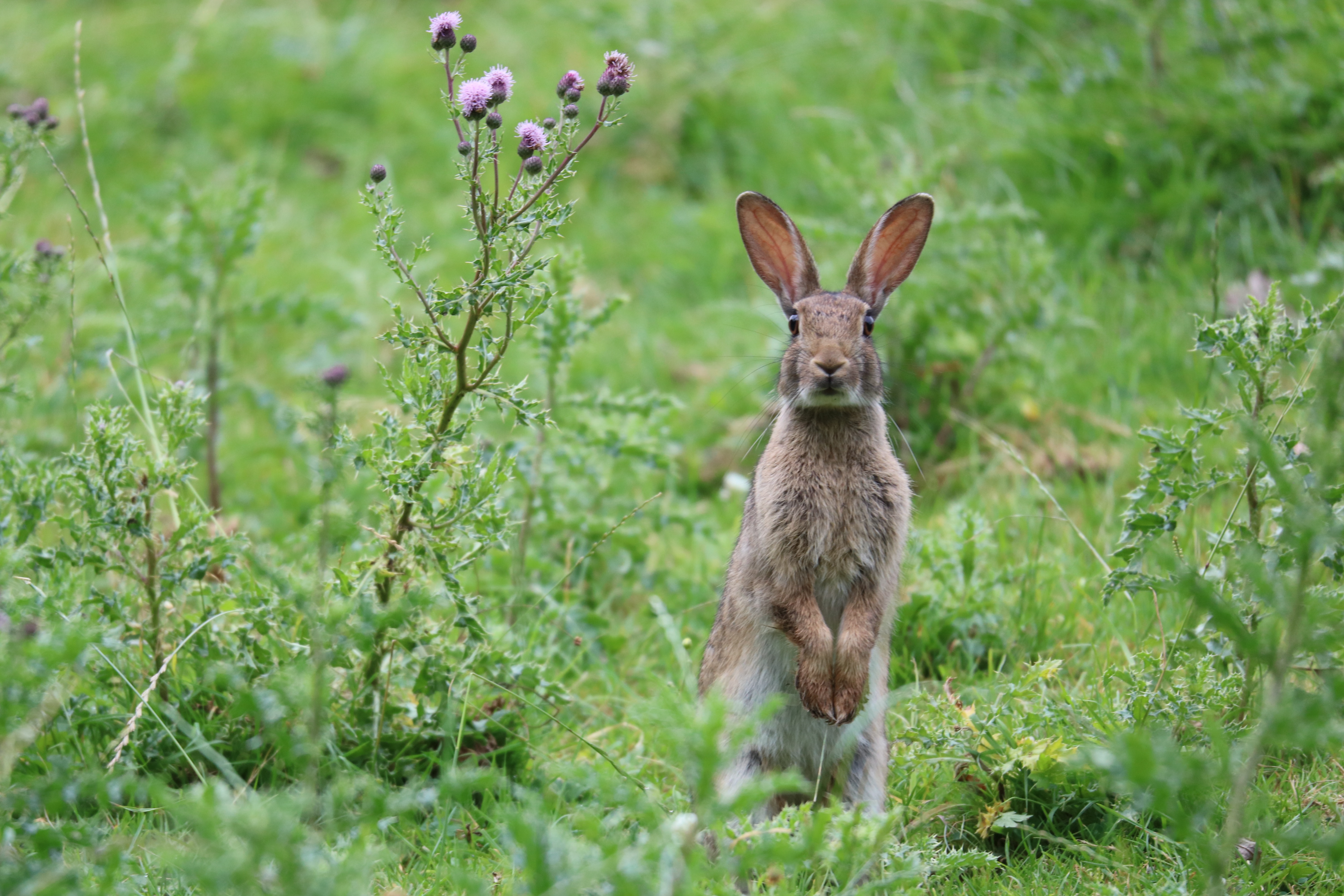 Who you looking at ?

Hares primarily live in open fields with scattered brush for shelter. They require cover, such as hedges, ditches and permanent cover areas, because these habitats supply the varied diet they require, and are found at lower densities in large open fields.In mainly grass farms their numbers are raised when there are improved pastures, some arable crops and patches of woodland. They are seen less frequently where foxes are abundant or where there are many buzzards.

Hares are primarily nocturnal and spend a third of their time foraging. During daytime, a hare hides in a depression in the ground called a “form” where it is partially hidden. Hares can run 40 MPH and when it’s in danger , It uses it’s speed to outrunning them in the open. In the wild , the Brown hares can live for as long as twelve years.

Brown hares are primarily herbivorous. During the spring and summer, they feed on soy, clover and corn poppy as well as grasses and herbs.They also eat twigs, buds and the bark of shrubs and young fruit trees during winter. Compared to the European rabbit, food passes through the gut more rapidly in the hare, although digestion rates are similar. They sometimes eat their own green, faecal pellets to recover undigested proteins and vitamins. 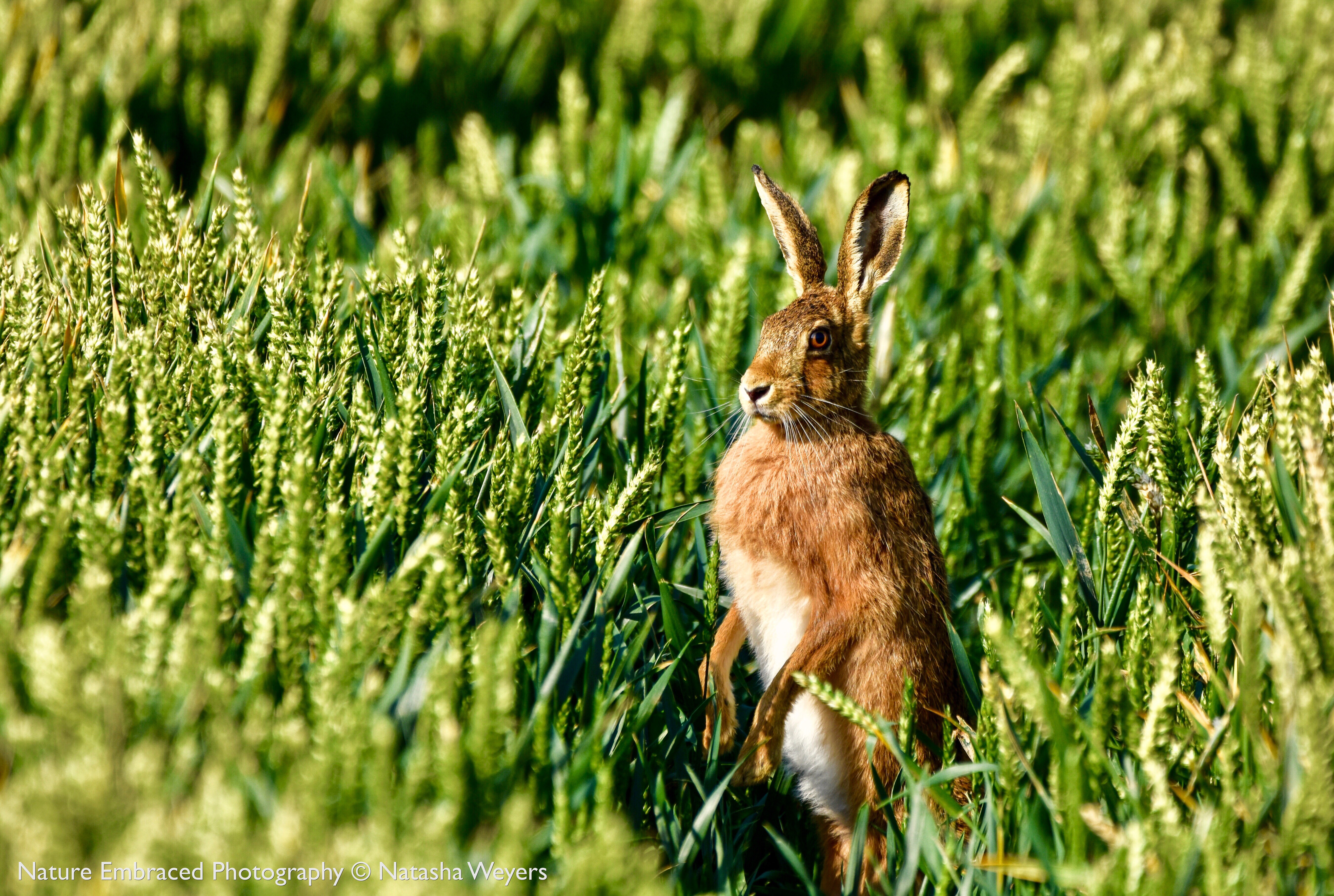 Females have six-weekly reproductive cycles and are receptive for only a few hours at a time, resulting in intensive competition among the local bucks. March brings the peak in the breeding season during which males will fight or box for the right to mate with the females. The female will also box with males to ward off unwanted attention. These boxing matches can be vicious and lead to scares and injuries as the hares confront each over boxing with their front paws.

The Brown hares breeding season which lasts from January to August. Females, or does, can become pregnant during the whole breeding season whilst the males, or bucks, are fertile all year round. Peak reproductive activity occurs in March and April, when the majority of females may be pregnant, with three or more babies.

The female gives birth in hollow depressions in the ground. An individual female may have up to three litters in a year.The baby hares or leverets unlike rabbits are born fully furred with their eyes open and are ready to leave the nest soon after they are born.]Leverets can eat solid food after 2 weeks and are fully weaned when they are four weeks old. Maturity occurs at seven or eight months for females and six months for males. 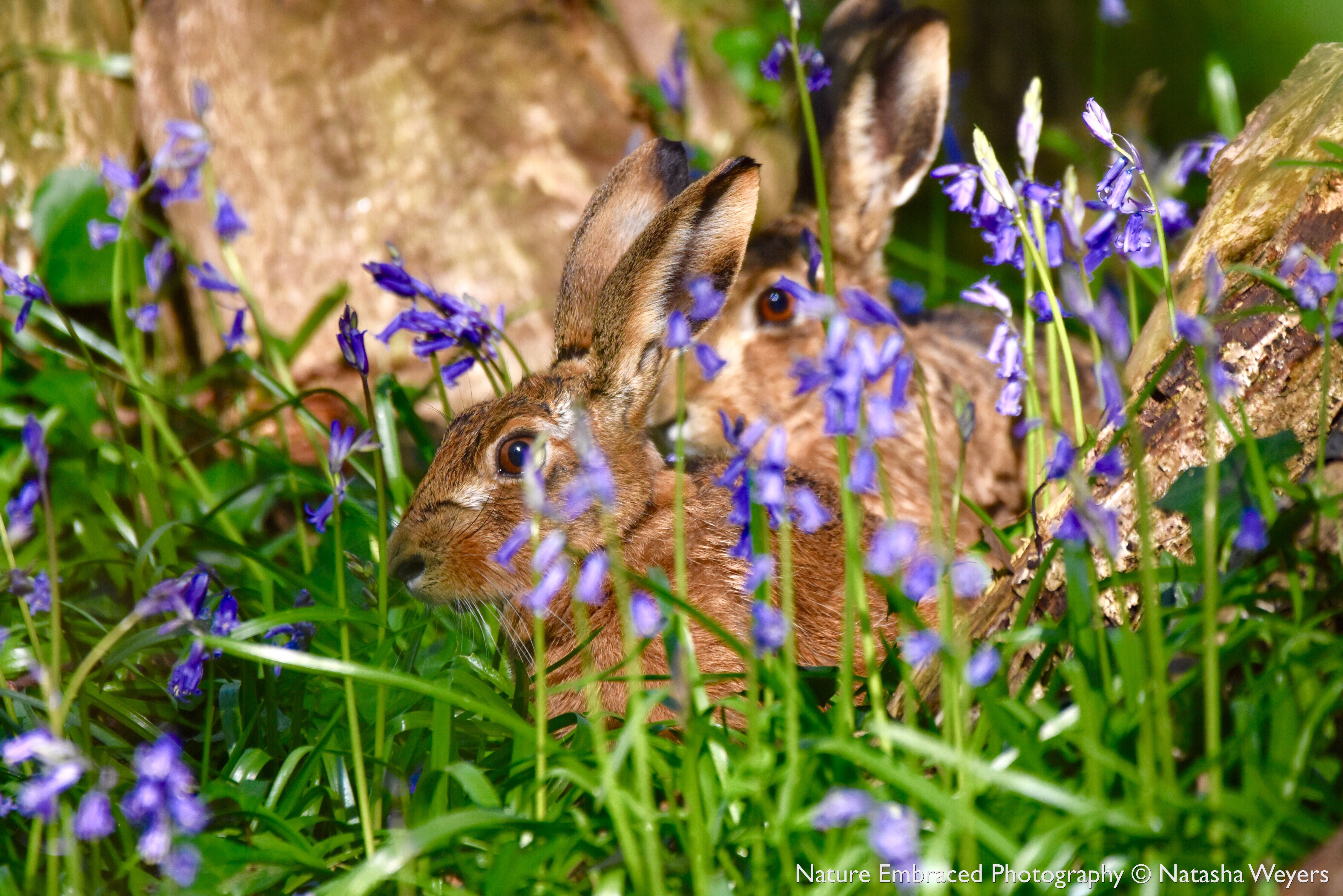 The brown hare adult can only be tackled by large predators, Foxes and birds of prey. During early spring the Brown hare can make up to 50% of the diet of the rural fox. 50% of the mortality of adult hares is due to being hunted. 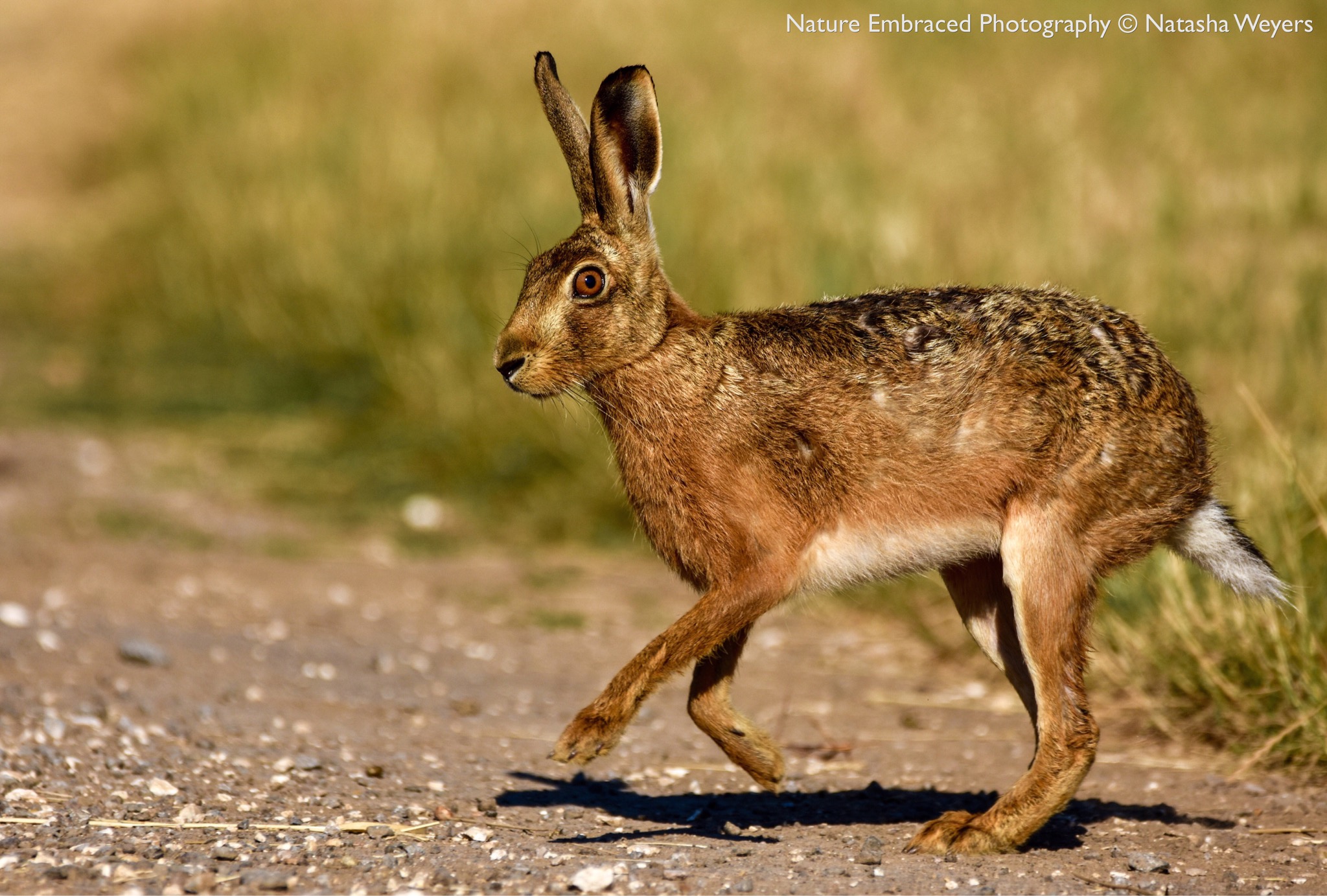 Hares have traditionally been hunted in Britain by beagle gentlemen and hare coursing. In beagle get the hare is hunted by a small pack of hunting dogs, the beagle, followed by people on foot . Both beagleing  and hare coursing have now been illegal since the introduction of the Hunting act in 2004 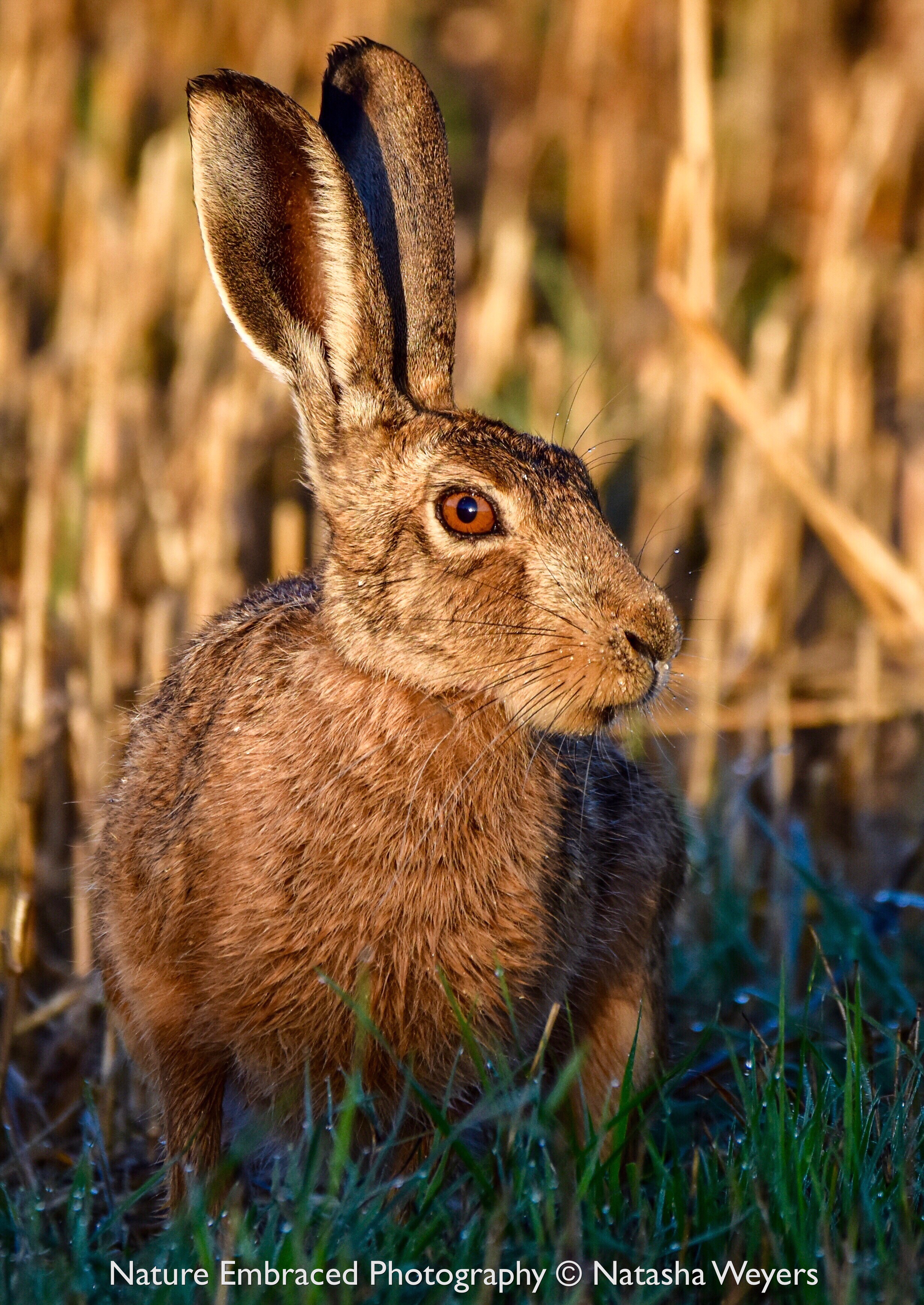 The brown hare is not considered to be at risk but numbers have been in decline since the mid 1960’s. As with most of the UK’s wildlife this is due to changes in farming practices and human development. The hare is an adaptable species and can easily move into new habitats, but it thrives best when there is an availability of a wide variety ground plants to supplement its main diet of grasses.The hare is considered a pest in some areas; it is more likely to damage crops and young trees in winter when there are not enough alternative foodstuffs. 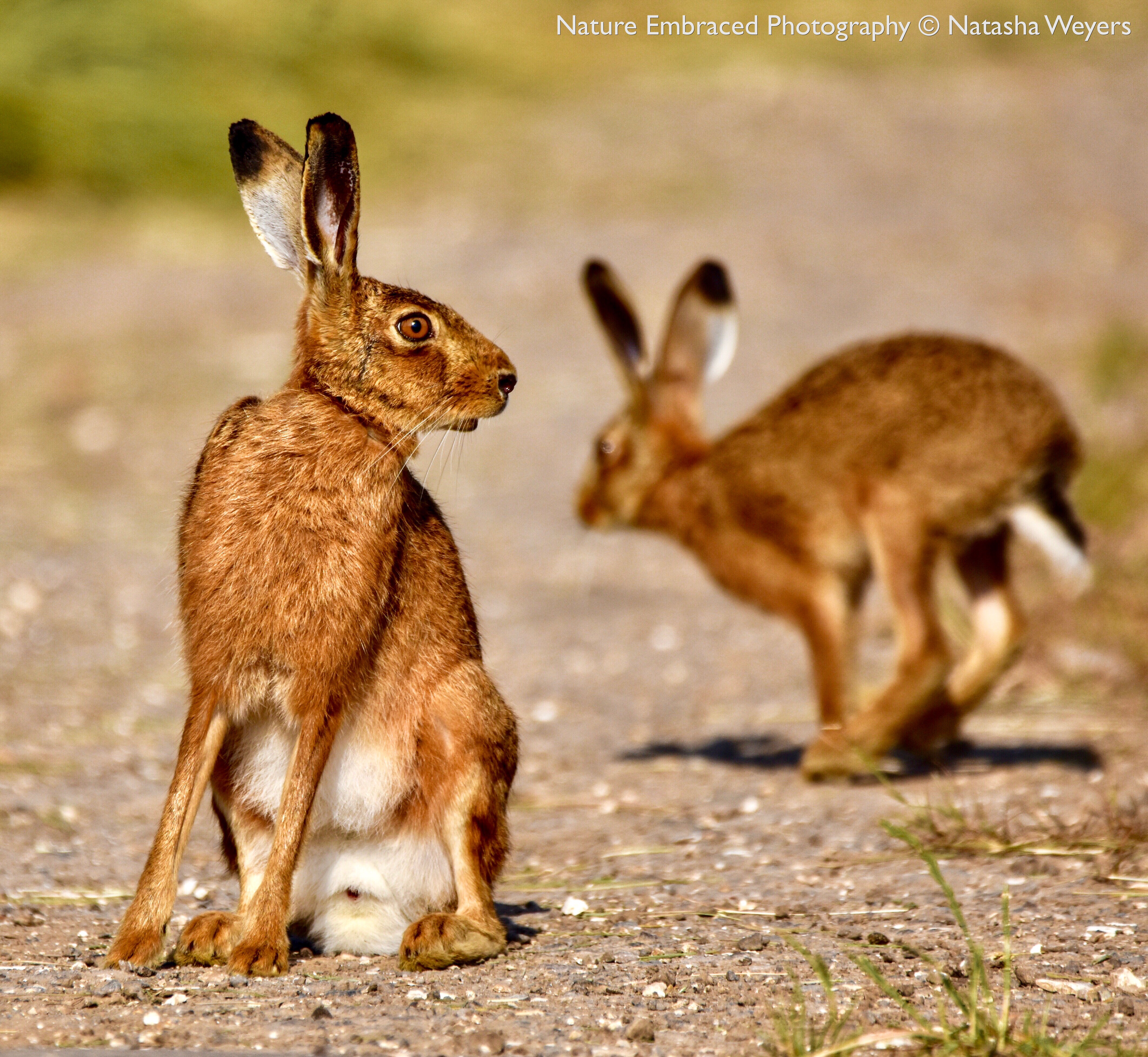 A little more about Natasha Weyers

I have had a passion for photography for the past 5 years or so. I started out with a bridge camera and then progressed onto a Nikon D7200 camera a few years ago. I usually marry this up with my Sigma 600mm lens for wildlife shots.

I am very much a Naturalist and my main interest is wildlife and landscape photography. I have a big love for Hares, which are a favourite subject to watch and capture on camera. I love being in touch with nature and for the past few months I have been volunteering at my local nature reserve as a Warden, and also participate at working parties maintaining the reserve.

Over the past few years I have been lucky to have numerous photos shown on BBC South and Meridian, and photos published in local and national newspapers, and also in a few in books. A couple of years BBC South Today interviewed me, as one of their regular photo contributors.

Following a long period of bereavement at the end of last year/start of this year (due to losing my mum to cancer), I decided to leave my past job and am aiming to make a fresh start in life and hopefully pursue photography as a part-time career, and also look for another part-time job. Photography has certainly been the perfect therapy and a great focus, which got me through tough times – being outdoors, surrounded by nature and capturing special moments, is when I feel my most content in life. And is a bonus if others also find enjoyment from seeing my photos.

Here’s the full story, the Brown Rat , Rattus norvegicus The Brown Rat is a native of central Asia which was introduced to the British Isles around 1720. It has subsequently spread throughout the British Isles, and indeed much of the temperate world, carried especially by humans in ships. There is little doubt that due […]

Weekend Wildlife Saturday 17th July from the Meadow Hide Welcome to another Weekend Wildlife , from the rather gloriously sunny Meadow Hide here in North Wiltshire. Another day flying solo here in the hide and it’s been surprisingly busy for a hot summers day , with most of the action centred on the paddling pool. […]

Here’s the full story, the Brown Rat , Rattus norvegicus The Brown Rat is a native of central Asia which was introduced to the British Isles around 1720. It has subsequently spread throughout the British Isles, and indeed much of the temperate world, carried especially by humans in ships. There is little doubt that due […]
MONDAY MUG SHOTS – THE RAT

Weekend Wildlife Saturday 17th July from the Meadow Hide Welcome to another Weekend Wildlife , from the rather gloriously sunny Meadow Hide here in North Wiltshire. Another day flying solo here in the hide and it’s been surprisingly busy for a hot summers day , with most of the action centred on the paddling pool. […]
WEEKEND WILDLIFE

Wildlife Wednesday   14-7-2021 By Peter Hanscomb At last summer has returned to the British isles, so it’s time for another solo trip to the Meadow Hide. The hide has now settled into the landscape and from the meadow entrance it has now almost completely disappeared, surrounded by a carpet of wildflowers and grass to the north […]
WILDLIFE WEDNESDAY

One of our local foxes was caught red-pawed last night stealing one of the hedgehog feeding boxes. Luckily no one was using it at the time so no hog was hurt .
STOP THIEF

A PICTURE PAINTS A THOUSAND WORDS

A picture paints a thousand words by Peter Hanscomb Blog number 1000 Well ok , it’s a play on words but the picture above of Flo the fox holds a special place in my heart. It’s the picture that kickstarted my passion for the natural world and wildlife photography. It was also the very first […]
A PICTURE PAINTS A THOUSAND WORDS

Weekend Wildlife Saturday 10 th July from the Meadow Hide It’s the weekend , and another sday at the hide this time I’m joined by Graham , and once again it’s rather damp here in North Wiltshire. The meadow has been very quiet today, probably due to the almost constant rain with the exception of […]
WEEKEND WILDLIFE

Say hello to the Jackdaw , Corvus monedula The Jackdaw is Britain’s smallest black crow ( a family of birds collectively known as corvids), which also includes ravens, crows, rooks, jays and magpies. With a distinctive silvery sheen to the back of its head. The pale eyes are also noticeable. The jackdaw call is a familiar […]
MEET THE MODEL – JANET JACKDAW
Loading Comments...
%d bloggers like this: