MEET THE MODEL – GORDON THE GUILLEMOT

Normally found in Northern waters, the Guillemot is a bird that spends most of its time out at sea, only coming ashore to breed. It is a relative of the penguin that has retained the ability to fly.

Once ashore the Guillemot nests in colonies on a bare ledge on a sheer cliff face often with no space between the next breeding pair. The female lays one egg that is pear shaped. Thinking behind this, is that the shape helps prevent it rolling of the ledge. Parents take it in turn to incubate the eggs which is kept safe between the adults feet for approx 33 days.

feathers become waterproof. It’s next act is one of sheer bravery as it is encouraged by its parents in the water below, to leap from the cliff face, often several hundred meters above. At this stage it cannot fly.

Once in the water the chick is looked after by its father and quickly becomes an expert swimmer. From the surface it will look beneath for prey and once spotted it will dive down propelled by its wings. Guillemots have been recorded as deep as 180 meters and can hold their breath for around 1 minute. Their main diet is fish such as herring and sprats, sand eels, crustaceans and worms. 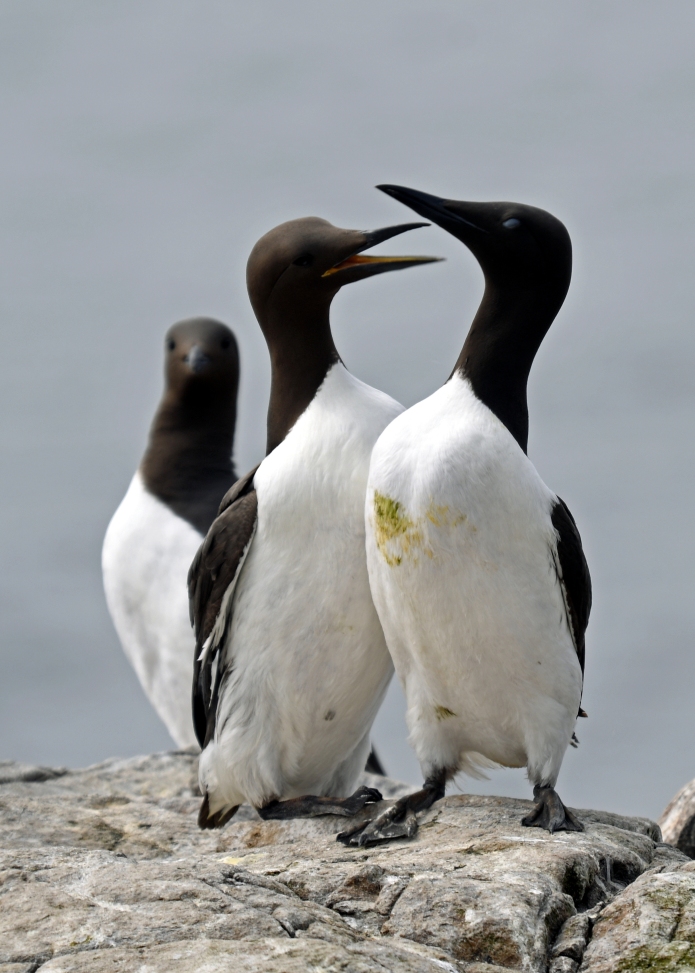 The Hide 18th January 2022 Again , it’s another day at the meadow hide and today it’s cold , darn cold and damp with patchy fog.  The thermometer says it’s -2c […]
THE HIDE

Meet the Model – Brian the Blackcap The blackcap , Sylvia atricapilla is a grey warbler with a distinctive black cap. It is a member of the Sylviidae family of […]
BLACKCAP

Meet the Model – Thomas the Song Thrush The Song Thrush , Turdus philomelos once known as the throstles  is a medium sized member of the thrush family. It is  smaller than […]
SONG THRUSH

I have never seen this technique used before but obviously it works. This Heron was filmed at Lower Moor Farm nature reserve. You might also like……….
GONE FISHING

Bob’s Blog – Lessons from a Robin

by Bob Brind-Surch, professional photographer and naturalist . http://www.naturesphotos.co.uk There is one question I receive more than any other either from people at camera club talks or booking on one […]
Bob’s Blog – Lessons from a Robin

ROOM AT THE INN

The fox hotel has a visitor. Early this morning a fox sniffed the entrance and then walked in to escape from the rain .The fox is still inside so I […]
ROOM AT THE INN