Meet the Model – Stan the Starling

Meet the Model – Stan the Starling

The European starling Sturnus  vulgaris has to be one of my favourite garden visitors. The starling, is a medium-sized passerine bird in the starling family, Sturnidae. It is about 20 cm (8 in) long and has glossy black plumage with a metallic sheen, which is speckled with white at some times of year. The legs are pink and the bill is black in winter and yellow in summer; young birds have browner plumage than the adults. It is a noisy bird, especially in communal roosts and when feeding, Overlooked and under appreciated by many maybe but if you look a little closer the colouring is fantastic.

The starling has a large local repertoire and can mimic the sounds of other birds.

The starling is 18–24 cm long, with a wingspan of 31–44 cm and a weight of 58–101 g. The plumage is iridescent black, glossed purple or green, and spangled with white, especially in winter. The underparts of adult male common starlings are less spotted than those of adult females at a given time of year. The throat feathers of males are long and loose and are used in display while those of females are smaller and more pointed. The legs are stout and pinkish- or greyish-red. The bill is narrow and conical with a sharp tip; in the winter it is brownish-black but in summer, females have lemon yellow beaks while males have yellow bills with blue-grey bases. Moulting occurs once a year- in late summer after the breeding season has finished; the fresh feathers are prominently tipped white (breast feathers) or buff (wing and back feathers), which gives the bird a speckled appearance. The reduction in the spotting in the breeding season is achieved through the white feather tips largely wearing off. Juveniles are grey-brown and by their first winter resemble adults though often retaining some brown juvenile feathering, especially on the head. Large flocks typical of this species can be beneficial to agriculture by controlling invertebrate pests; however, starlings can also be pests themselves when they feed on fruit and sprouting crops. Common starlings may also be a nuisance through the noise and mess caused by their large urban roosts.

The common starling is a highly gregarious species, especially in autumn and winter. Although flock size is highly variable, huge, noisy flocks – murmurations – may form near roosts. These dense concentrations of birds are thought to be a defence against attacks by birds of prey such as peregrine falcons or Eurasian sparrowhawks.[Flocks form a tight sphere-like formation in flight, frequently expanding and contracting and changing shape, seemingly without any sort of leader. Each starling changes its course and speed as a result of the movement of its closest neighbours.

Despite the population fall, there are still over 800,000 breeding pairs of starlings in the UK.

The common starling is largely insectivorous and feeds on both pest and other arthropods. The food range includes spiders, crane flies, moths, mayflies, dragonflies, damsel flies, grasshoppers, earwigs, flies, beetles, bees, wasps and ants. Prey are consumed in both adult and larvae stages of development, and common starlings will also feed on earthworms, snails, small amphibians and lizards. While the consumption of invertebrates is necessary for successful breeding, common starlings are omnivorous and can also eat grains, seeds, fruits, nectar and food waste if the opportunity arises.

Unpaired males find a suitable cavity and begin to build nests in order to attract single females, often decorating the nest with ornaments such as flowers and fresh green material, which the female later disassembles upon accepting him as a mate. Common starlings are both monogamous and polygamous; although broods are generally brought up by one male and one female, occasionally the pair may have an extra helper. Pairs may be part of a colony, in which case several other nests may occupy the same or nearby trees. Males may mate with a second female while the first is still on the nest. Breeding takes place during the spring and summer with the 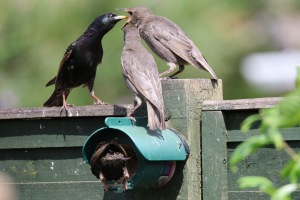 female lays eggs on a daily basis over a period of several days. If an egg is lost during this time, she will lay another to replace it. There are normally four or five eggs that are oval in shape and pale blue or occasionally white, and they commonly have a glossy appearance. Incubation lasts thirteen days, although the last egg laid may take 24 hours longer than the first to hatch. Both parents share the responsibility of brooding the eggs, but the female spends more time incubating them than does the male, and is the only parent to do so at night when the male returns to the communal roost. The young are born blind and naked. They develop light fluffy down within seven days of hatching and can see within nine days. The average life span of a starling is about 2–3 years.

The majority of starling predators are birds. The typical response of starling groups is to take flight, with a common sight being undulating flocks of starling flying high in quick and agile patterns. Their abilities in flight are seldom matched by birds of prey. Starlings are hunted by hawks such as the sparrowhawk and falcons including the peregrine falcon and kestrel . Nests can be raided by mammals capable of climbing to them, such as stoats and squirrels .Cats may catch the unwary ground feeding bird.