Not so long ago the outlook for my local hedgehog population was looking pretty bleak. No sightings for months and a couple of casualties on the road , to be honest I feared the worst. Then after months of scrolling through cctv footage a solitary hedgehog reappeared. Even better it was definitely sleeping in the garden , so operation Hog swung into full force. 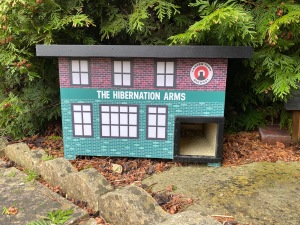 The Hog cafe was restocked and it was soon joined by the newly opened Hibernation Arms. Then we discovered that one had become two ! Hog Cam was back in action , with footage being recorded every night. We now have five hedgehog houses in the garden , together with a pub and the Hog cafe. It’s been fantastic to have our little prickly friends back on the scene , the garden wasn’t the same with the little chaps missing.  And now we have even better news………….

It’s that time of the year when hedgehogs come out of hibernation, and thanks to our friends at the Oak and Furrows rescue centre , we are about to release two more hedgehogs today , into our garden. So it’s time to say hello to Bud and Stella !

Both are now settled in to new homes in the garden. The Hog cafe has extra meals available and unlike the rest of the U.K. the Hibernation Arms is open and ready to greet the new hogs. Both are currently blocked into their new accommodation, and  once it gets dark tonight we will unblock the houses and for the first time in six months they will be finally free.