Meet the model – Sam the Shelduck

The shelduck is a large and distinctive duck found close to the coast all around the U.K. White, with a black, bottle green head and neck , a brown band around its breast and red bill. Both sexes look alike except the male has a knob on top of its bill during the summer. Juvenile shelducks look similar to adults except their colouration is duller. 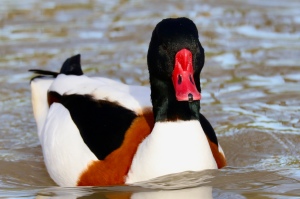 Shelducks are monogamous and will mate for life. They are sociable birds and will live in large flocks leaving their young chicks in crèches with just one of two adults. Shelducks build their nests from grass and moss and lined with down in caves, tree holes or abandoned rabbit burrows. The female shelduck generally breed first in their second spring, however some males may not breed until they are almost five years old. The shelduck has one single brood per year and the eggs are laid at the end of April in a clutch of between 6 to 10 eggs. The eggs are incubated by the female for around 30 days with the young birds fledging in a further 6 weeks. Around 50% of the young make it water , with only around 10% making it to adults. 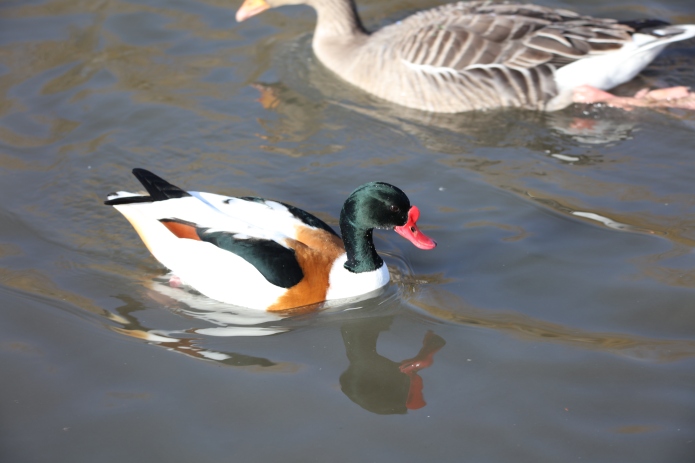 The shelduck’s diet consists of invertebrates , small shellfish , aquatic snails and plants. They forage in shallow water by upending and dabbling.

Classified as amber in the UK under birds of concern , as with most wildlife in the UK the shelduck is protected under the wildlife and countryside act , 1981