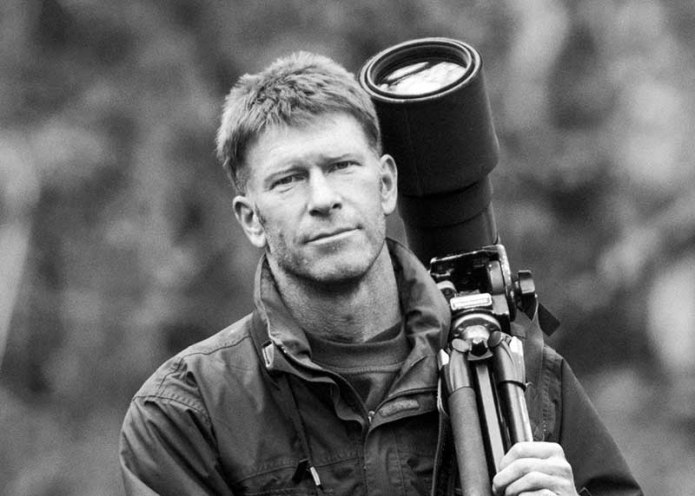 David is a wildlife photographer: that means he only takes pictures of wild animals in their natural habitat. His extensive knowledge of the animals and birds and their environment is the first essential ingredient behind his breath-taking images. The second vital element is research: David studies relentlessly to get under the skin of a new subject before heading into the field. The third is endless patience: David regularly waits for hours in a floating hide covered in leeches to get the perfect shot.

Wildlife and photography have always been David’s two great loves. His earliest memory is of studying woodlice aged just two. At eight, he bought his first second-hand SLR camera and was delighted when he managed to get a full-frame shot of a blue tit at nest. As he got older and took his first job in East London, he would often use his spare time at the top of tower blocks to look for kestrels. It is this lifelong interest that has made David the expert that he is today.

David’s patience extends to sharing his skills with others on his wildlife photography courses and teaching on behalf of the Sussex Wildlife Trust. Covering everything from beginners to advanced skills, from framing to post-production skills, David helps his students create images that connect with the viewer.

“When I teach photography, I am not teaching people to be amateurs and get documentary shots. I want them to take photographs in such a way that they make the viewer see or experience something. I want them to make a connection with the viewer, to transport them.”

A seasoned traveller, David is an expert international wildlife photography guide, teaching small groups of three to eight people in both English and Portuguese. He was headhunted by steppes,   the leader in worldwide ethical travel, and conducts tours for them in India, the Galapagos, Kenya and Rwanda. He also conducts bespoke private tours in specific locations or to film target species, with particular expertise in: the Pantanal region of Brazil, the Maasai Mara, and Hungary.

“My tours are completely bespoke, inclusive packages. We don’t stay in 5-star accommodation, but we spare no expense in terms of getting the best wildlife experience. We work with only the very best guides and we don’t operate a ‘shoot and move on’ policy: we spend time with the animals to really get under their skin and get the best shots possible.”

David is passionate about the wildlife on our doorstep. He owns 11 acres of ancient woodland at Scrag Copse in Sussex, which he manages to create the best possible opportunities for great shots on his wildlife photography courses. He also runs badger watching events for small groups and 1-2-1 badger photography courses.

David also runs a number of non-photographic UK wildlife safaris, including expert guided birding on the North Kent coast and puffin watching off the Welsh coast. With all these experiences, it is David’s expert knowledge that enables even beginners to see things they have never seen before.

A passionate believer in protecting functioning eco systems, David advises internationally on eco-tourism and how it can be used to protect habitats and species. He is also actively involved in conservation in the UK: he is the co-ordinator of the BN5 owl project, a community based project in Sussex to monitor and boost owls, and he is a committee member of Henfield Bird Watch, winner of the British Trust for Ornithology’s “Marsh Local Ornithology Award”.

“Here in the UK we have decimated our wildlife populations, and habitats are being squeezed around the globe from climate change, population pressure, and intensive agriculture. It is vital that all ‘progress’ and ‘business’ should be within functioning eco-systems. The second largest industry in the UK is leisure and tourism. As such, wildlife has, as well as an emotional and scientific value, an economic value which should be realised. If we start to consider wildlife as an ‘asset’, it will be better valued and protected.”

It’s been over a year since David’s book ‘7 Years Of Camera Shake’ was crowdfunded (incredibly it was the fastest non-fiction book to be crowdfunded in the UK) and it is now being published by the world’s largest publisher Penguin Random House. From 7th September David’s book will be available in bookshops nationwide and available to buy online. ( click here for more details )

50% of David’s profits from the book will be donated to Parkinson’s UK who have committed to allocating all funds raised towards supporting research.

This feature has been produced with the kind permission of David Plummer.

BLACKBIRD AT THE MEADOW

If you follow the blog you might know that the humble Blackbird is by far and away my favorite British bird. A common sight in many gardens , including my […]
BLACKBIRD AT THE MEADOW

Meet the Model – Norbert the Nuthatch

The latest addition to hide visitors , a Great spotted woodpecker. He has been hammering away in a tree less than five metres from the hide. Despite the unmistakable sound […]
NEW ARRIVAL

THREE IS THE MAGIC NUMBER

The warmer weather is definitely having an effect on our resident hedgehogs. On the final day of winter , yes spring begins tomorrow, another hog has reappeared from his winter […]
THREE IS THE MAGIC NUMBER

BIRDS OF PREY @ THE MEADOW We are now in the second phase of the rejuvenation of the wildflower meadow. The hide is as good as finished and has surpassed […]
BIRDS OF PREY

Our resident garden mouse is getting very brave , normally if there is another animal in the garden it runs for cover , with good reason when you’re at the […]
BRAVE MOUSE