The red squirrel , Sciurus vulgaris is an arboreal, omnivorous rodent and the only native species of squirrel found in Great Britain . Under threat from both it’s cousin from the grey squirrel , which was introduced to Great Britain from North America by the Victorians in the 1800’s with the first record of them escaping and establishing a wild population in 1886 , and habitat destruction. The red squirrel was once a common sight across the British Isles has rapidly decreased in numbers in recent years , with numbers slowly begin to stabilise in Scotland and small pockets of territory in England , due to conservation efforts, awareness and the increasing population of the pine marten, a European predator that selectively controls grey squirrels.

Reds don’t hibernate; in winter they rely on food that they have previously buried and they can locate their food supplies in over 1 foot of snow

The red squirrel has a typical body length of 20 to 22 cm (7.5 to 9 in), a tail length of 15 to 20 cm (6 to 8 in), and a body weight of 250 to 340 g (8.8 to 12.0 oz). Males and females are the same size. The red squirrel is smaller than the grey squirrel which has a body length of 25 to 30 cm (10 to 12 in) and weighs between 400 and 800 g (14 oz and 1 lb 12 oz). The long tail helps the squirrel to balance and steer when jumping from tree to tree and running along branches, and may help to keep the animal warm during sleep. Like most tree squirrels the red has sharp, curved claws to enable it to climb and descend broad tree trunks and even house walls. Its strong hind legs enable it to leap gaps between trees. The red squirrel also has the ability to swim. The coat of the red squirrel varies in colour with time of year and location, red coats are most common in Great Britain. The underside of the squirrel is always white-cream in colour. The red squirrel sheds its coat twice a year, switching from a thinner summer coat to a thicker, darker winter coat with noticeably larger ear-tufts. 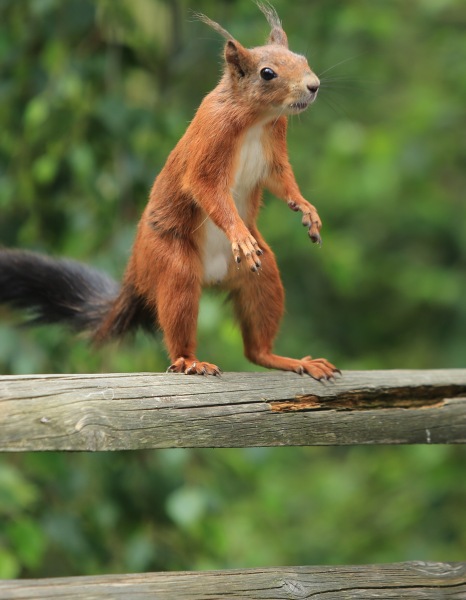 Mating can occur in late winter during February and March and in summer between June and July. Up to two litters a year per female are possible. Each litter averages three young, called kits. Gestation is about 38 to 39 days. The young are looked after by the mother alone and are born helpless, blind and deaf. They weigh between 10 and 15 g. Their body is covered by hair at 21 days, their eyes and ears open after three to four weeks, and they develop all their teeth by 42 days. Juvenile red squirrels can eat solids around 40 days following birth and from that point can leave the nest on their own to find food; however, they still suckle from their mother until weaning occurs at 8 to 10 weeks. During mating, males detect females that are in œstrus by an odour that they produce, and although there is no courtship, the male will chase the female for up to an hour prior to mating. Usually multiple males will chase a single female until the dominant male, usually the largest in the group, mates with the female. Males and females will mate multiple times with many partners. Females must reach a minimum body mass before they enter œstrus, and heavy females on average produce more young. If food is scarce breeding may be delayed. Typically a female will produce her first litter in her second year.

Red squirrels rotate their ears to pick up sounds, and possibly also to express themselves – like dogs.

Red squirrels that survive their first winter have a life expectancy of 3 years. Individuals may reach 7 years of age, and 10 in captivity. Survival is positively related to availability of autumn–winter tree seeds; on average, 75–85% of juveniles die during their first winter, and mortality is approximately 50% for winters following the first The red squirrel is found in both coniferous forest and temperate broad leaf woodlands. The squirrel makes a drey (nest) out of twigs in a branch-fork, forming a domed structure about 25 to 30 cm in diameter. This is lined with moss, leaves, grass and bark. Tree hollows and woodpecker holes are also used. The red squirrel is a solitary animal and is shy and reluctant to share food with others. However, outside the breeding season and particularly in winter, several red squirrels may share a drey to keep warm. Social organisation is based on dominance hierarchies within and between sexes; although males are not necessarily dominant to females, the dominant animals tend to be larger and older than subordinate animals, and dominant males tend to have larger home ranges than subordinate males or females.

Red squirrels have four fingers on each paw, plus a vestigial thumb, and five toes. Their double-jointed ankles allow them to go down a tree headfirst.

The red squirrel mainly eats the seeds of trees, neatly stripping conifer cones to get at the seeds within together with fungi , nuts , berries and very occasionally the eggs of nesting birds. Excess food is put into caches, either buried or in nooks or holes in trees, and eaten when food is scarce. Although the red squirrel remembers where it created caches at a better-than-chance level, its spatial memory is substantially less accurate and durable than that of grey squirrel , it therefore will often have to search for them when in need, and many caches are never found again. Between 60% and 80% of its active period may be spent foraging and feeding, mostly in the morning and in the late afternoon and evening. It often rests in its nest in the middle of the day, avoiding the heat and the high visibility to birds of prey that are dangers during these hours. During the winter, this mid-day rest is often much more brief, or absent entirely, although harsh weather may cause the animal to stay in its nest for days at a time. 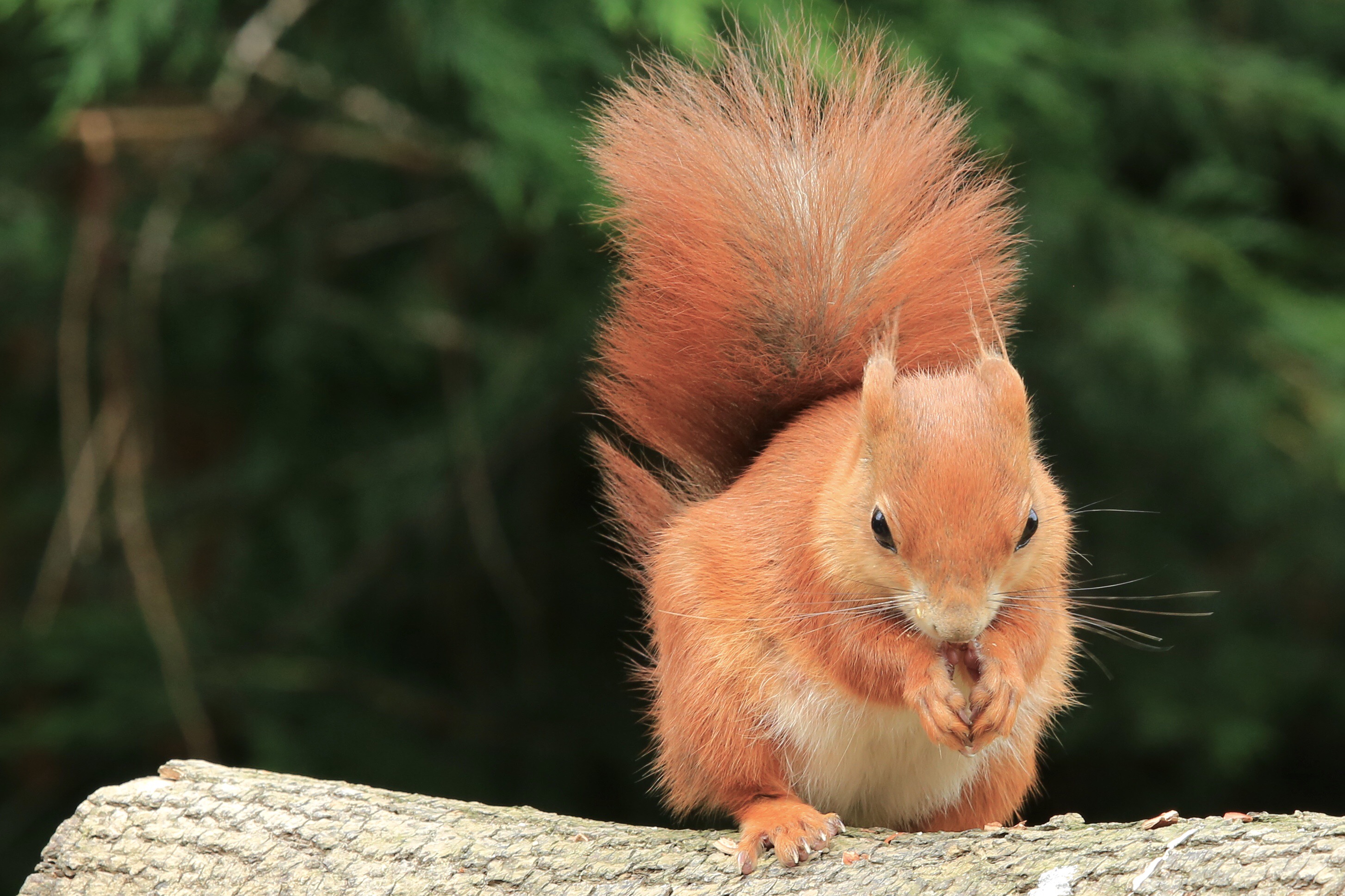 Red squirrels can jump more than 2 metres and survive a fall of more than 12 metres without injury.

Red squirrel coats range from light orange to almost black and are shed twice a year, turning thicker and darker in winter. 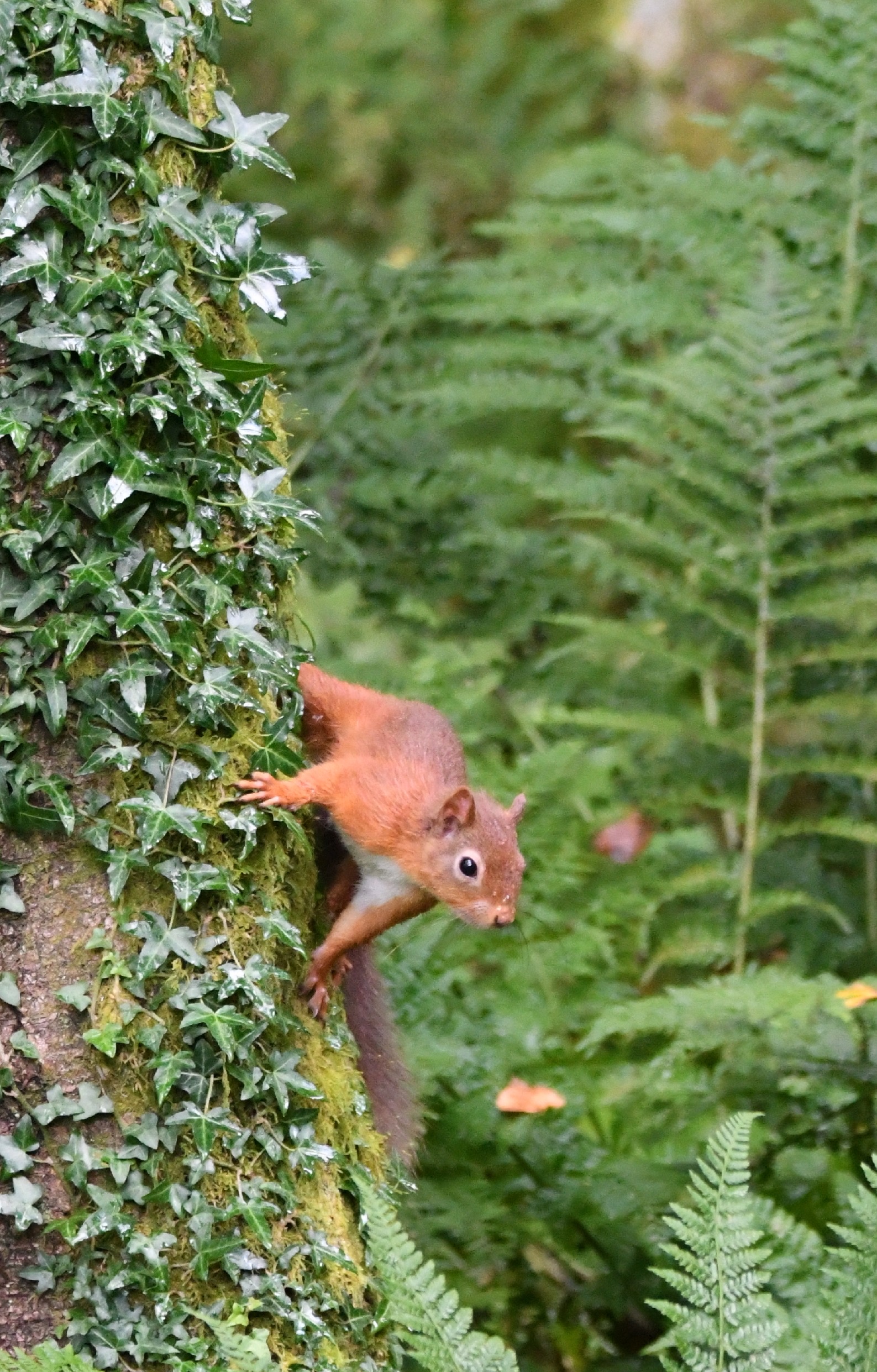 MEET THE MODEL -KERRY THE KESTREL

Meet the Model , Woody the Great Spotted Woodpecker The Great spotted woodpecker , Dendrocopos major is one of three native woodpeckers here in the U.K ( the other two […]
THE GREAT SPOTTED WOODPECKER

Meet the Model – Percy the Puffin

The Dunnock Dunnocks , Prunella modularis are native to the UK and large areas of Europe with their range spreading as far as Lebanon, northern Iran, and the Caucasus. The […]
THE DUNNOCK

Say hello to Robbie , a fine example of a native British Red Deer ( Cervus elaphus ) The Red Deer is one of only two true native deer species […]
Meet the Model – Robbie the Red Deer

Say hello to the Jackdaw , Corvus monedula The Jackdaw is Britain’s smallest black crow ( a family of birds collectively known as corvids), which also includes ravens, crows, rooks, […]
THE JACKDAW

Meet the Model – Jasmine the Jay The Jay or Garrulus glandarius is undoubtedly the most colourful member of the crow family of birds Family name Corvidae. The genus term, […]
THE JAY
Loading Comments...
%d bloggers like this: