The Blue Tit is an easy to recognise garden favourite. With it’s small size and distinctive blue and yellow plumage , the Blue tit is a regular garden visitor that’s wide spread throughout the British Isles and mainland Europe. The Blue Tit is a member of the Tit family of birds , Paridae . Usually resident , the bird does not migrate and in fact most stay within a short distance from where they hatch , typically less than 20 miles.

The Blue Tit is around 12 cm long with a wingspan of 18 cm and weighs between 11- 20 g . With a blue crown and dark line passing through the eye, with white cheeks to the chin. The forehead and a bar on the wing are white. The nape, wings and tail are blue and the back is yellowish green. The underparts is mostly yellow with a dark line down the abdomen. Both male and female adult birds have a similar appearance.

The Blue tit will nest in any suitable hole in a tree, wall, or stump, or an artificial nest box, competing with Great Tits and House Sparrows for nesting sites. The same hole ( nesting site ) is returned to every year, and when one pair dies another pair will takes possession of the nesting site. It is estimated that there are 3,300,000 breeding pairs in the UK. The successful breeding of chicks is dependent on sufficient supply of green caterpillars as well as satisfactory weather. Breeding seasons may be affected badly if the weather is cold and wet between May and July, particularly if this coincides with the emergence of the caterpillars on which the nestlings are fed. 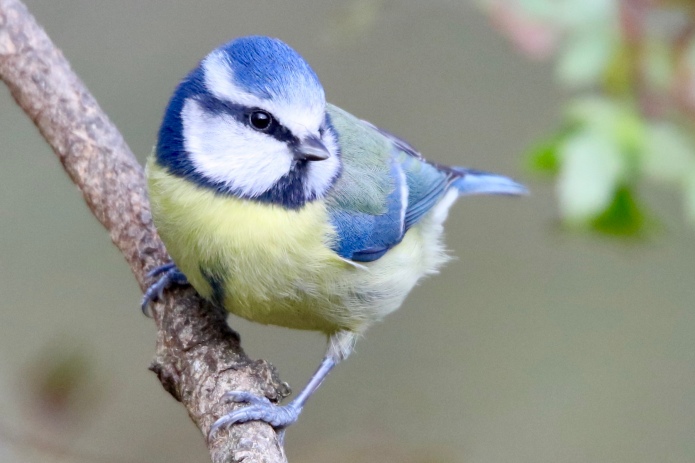 Eggs are small in size, 14–18 mm in diameter. The egg size does vary, depending mostly on the size of individual females and habitat . The nesting material is usually moss, wool, hair and feathers, and the eggs are laid in April or May. The number in the clutch can be very large with seven or eight eggs laid by a single female. The bird is a protective parent, hissing and biting at any intruder. When protecting its eggs it raises its crest, but this is a sign of excitement rather than anger, for it is also elevated during nuptial display. The survival rate for young in their first year is about 35% and for adults the survival rate is about 50% . The typical lifespan for an adult is only around three years.

The Blue Tits diet is made up of small insects and spiders during the summer months supplemented by fruit , nuts and the young buds of trees and plants. The bird has adapted and evolved the ability to digest milk and cream and is an acrobatic favourite on bird feeders up and down the country.

The small size of the Blue Tit makes it vulnerable to prey by larger birds such as Jays and small birds of prey like the Sparrow Hawk. Nests may be robbed by mammals such as weasel , red squirrel and the grey squirrel. However in Britain the biggest threat to the Blue Tit is the domestic cat , responsible for nearly 50% of the fatalities. 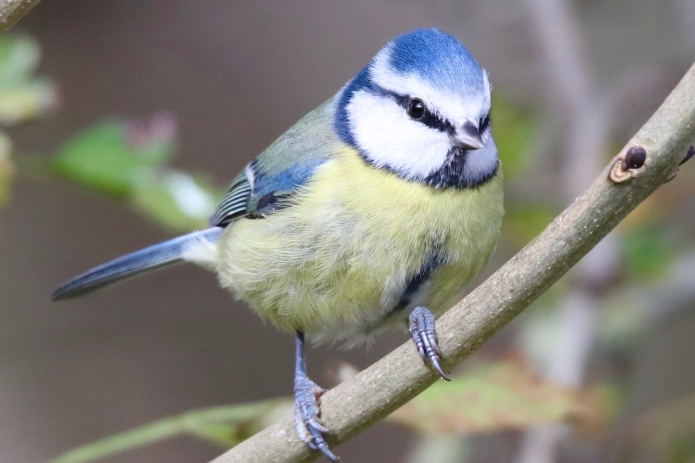 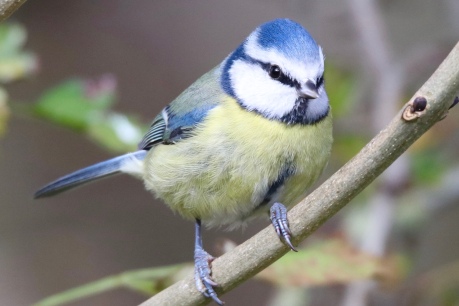 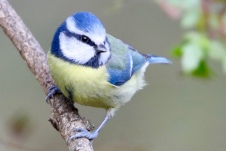