Meet the Model , Percy the Puffin

words and pictures by Graham Stewart 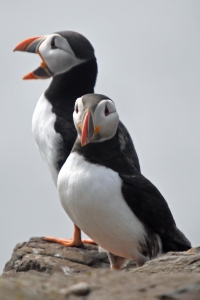 Since a child this has always been a bird that I have wanted to see in the flesh, it is often referred to as “Sea Parrot” or “Clown of the Sea” due to its brightly coloured bill and eye colouration which are part of its summer plumage but, to me there is something a bit sad looking about this beautiful bird. So on a recent holiday to Seahouses in Northumberland I jumped at the chance to take a boat trip to the Farne Islands where I was promised by the skipper that I wouldn’t be disappointed.

Thankfully it was a very pleasant day with calm seas, the trip on the Catamaran was a thoroughly enjoyable one and I was able to retain my breakfast! After 25 minutes or so I was rewarded with my first sight of a sole Puffin sitting in the sun on top of a cliff face, after that the sightings came thick and fast as we skirted the cliffs before finally landing on the Island itself with an hour to go explore.

Timing wise I could have done with being a month or so later as that would have given me the opportunity to possibly see a young “Puffling” or get the shot everyone wants, the adult Puffin with a beak full of Sand Eels, but beggars cant be choosers! 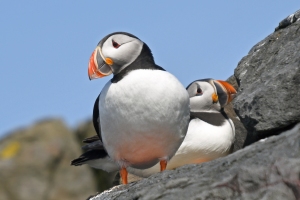 The Puffin itself spends most of its time at sea, only returning to land for the breading season that starts March/April time and it will generally return to the colony from which it hatched. Once on land their nest consists of a burrow which they will either excavate themselves or “acquire” a rabbits burrow. Puffins lay only 1 egg and the incubation duties are carried out by both parents over a period of approx. 40-45 days. Once hatched the puffling will take around 6 weeks to fully fledge.The entire colony is extremely synchronised with all pufflings fledging within a couple of days of each other and once fledged they will head back out to sea, not returning to land for several years. Sexual maturity is reached around 5 years old.

A Puffins diet consists of small fish, Sand Eels, small Squid, marine worms and crustaceans which it catches by diving from the surface of the water. The Puffin is a great swimmer, using its wings for propulsion and its feet as rudder it is able to dive to around 60 meters and remain submerged for up to 1 minute during which time it is able to catch multiple fish.

Threats to the puffin come in various guises, generally it is safest whilst out at sea where the danger is from below the water where seals or other large fish have been known to eat them. As puffins tend to colonise islands the risk from predation from foxes stoats weasels etc is minimal however they are still at risk from other sea birds such as Skua and the Great Black-backed Gull which can take out an adult bird. Other smaller gulls are also able to take a young puffin or an egg that has not properly been concealed within the burrow they have also been known to harass the Puffin to drop its catch of fish. Other influences are large scale commercial fishing reducing available food sources, warming waters causing other fish to head further north and probably most sadly, there is a tradition of Puffin Hunting. No one of these things is solely to blame but it is clear that combined they are responsible for the vast decline in Puffin numbers. There was in fact an article in the Guardian last year entitled “A world without Puffins” 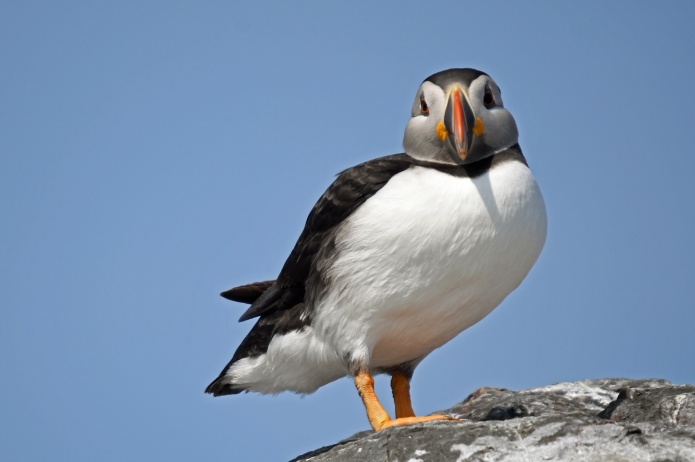 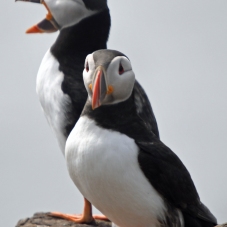 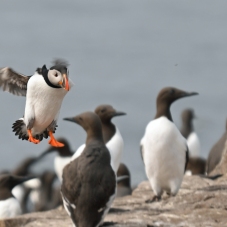 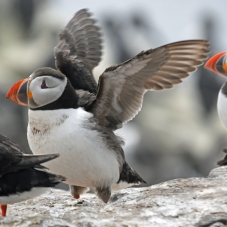 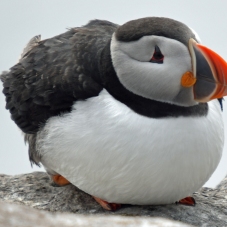 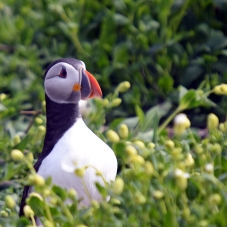 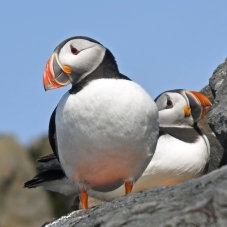 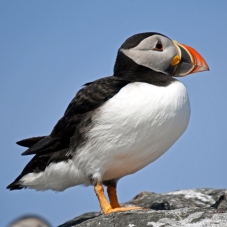 Three is the magic number. Little and large are still hanging around in the garden and last night they were joined by a new mysterious hog. Much to Large the […]
THE BOSS

Say hello to Wendy the Wren , Troglodytes troglodytes The wren is a small brown bird, almost rounded, with a fine bill, quite long legs and toes, very short round […]
MEET THE MODEL – WENDY THE WREN

Little and large our two new rescue hedgehogs are still in the garden , four days after release . Either the foods good here , the accommodation is free or […]
L & L