Most people think of the harvest mouse as the tiny red-brown animal
clinging to a ripe ear of wheat, however you are just as likely to find
the mouse in a reed bed or clump of cocksfoot grass in an arable field
margin.

The harvest mouse is the smallest rodent in Great Britain , 50-75mm long and weighing an average of only 5-8g which is about the same as a 2 pence piece. Its blunt nose, small hairy ears and small size makes it easy to distinguish from all the other British mice species. It is the only British animal with a true prehensile tail that can be used as a fifth limb.
It can use the tail to anchor itself in the tail stems of grass and wheat and together with it’s light weight makes it an excellent climber when feeding in the stems of cereals and grass.

Harvest mice have a short life span,6 months being the average. Cold weather , lack of food and predation after harvest causes the population to crash in winter. Cold and wet weather causes the highest levels of Harvest mouse mortality , their small size and body weight makes it difficult to keep warm during the damp cold months.The mice make up for this during the summer breading rapidly with two or three litters between late May and September . There are usually around six young which are born in woven grass nests. The young are born blind and hairless but grow extremely quickly and start to explore outside the nest by the
eleventh day.

Harvest mice feed around dusk and dawn in the stalks of long grasses and reeds, for which they need to be extremely agile climbers. In winter they retreat to ground level, feeding on fallen grass seeds and sheltering in the bases of thick tussocky grasses.Harvest mice are renowned for making nests which are woven from living plants such as grasses and reeds. The mice split the leaves down the veins to keep the strength in them and use their paws to make the intricate nest in just one night.
They can occur quite low to the ground in tussocky grass, or higher up in taller vegetation such as reeds.

Harvest mice have many predators: weasels, stoats, foxes, cats, owls,hawks, crows, even pheasants.They have the ability to sense vibrationsthrough the soles of their feet from some distance away , giving the mousean early warning to the presence of larger animals.

Harvest mice are listed as a BAP (Biodiversity Action Plan) Species
because they are thought to have become much scarcer in recent years and they require conservation plans to reverse the decline. Changes in habitat management and agricultural methods are thought to be the main cause for the loss of populations from certain areas. 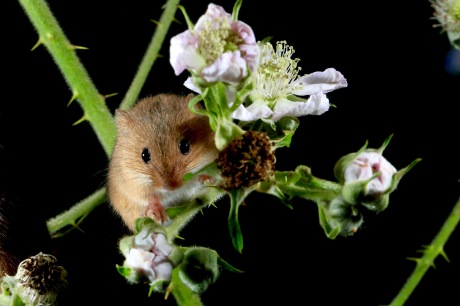