GG the young fox needs help. GG has been spotted in our back garden for the past few nights on our cctv and the young chap has a really bad case of Sarcoptic mange , sarcoptes scabeii also called fox mange the single most common infection in British foxes. ( more information )

If untreated GG’s prospects aren’t good , typically most foxes will die within 2-3 months , and it’s a slow painful end.  After a lot of phone calls today , my wife Anne has managed to borrow and Fox trap. So the plan is to set up the trap in the back garden ,baited with a tasty lump of chicken and wait , hopefully trap GG and then off to the vets. If we can catch GG in time , there is a really good chance of a full recovery , only time will tell ?

Our little visitor GG isn’t to sure about our new garden feature , the cage and has been giving it a wide berth. Not great news , however last night he had a little look with two of his hog friends . I guess safety in numbers ?

GG has been in and around the garden for the past few nights , still no nearer to catching him in the trap , however we have managed to feed him 4 antibiotic tablets over the last two nights hidden in cheese lumps . Definitely a step in the right direction.

GG has now had 4 nights of antibiotics, the trap is still set but no luck catching him ….and he slept in the trap last night !!

Another night of cheese wrapped antibiotics, GG’s getting a real taste for Canadian Cheddar cheese. He’s also getting brave , approaching to within a few metres of me . This can happen with badly infected foxes , they loose fear of humans but GG looks like he’s still got some fight in him . Still no closer to catching the little one but we are still trying. Latest picture not the best but you can still make out the mange at his rear end. 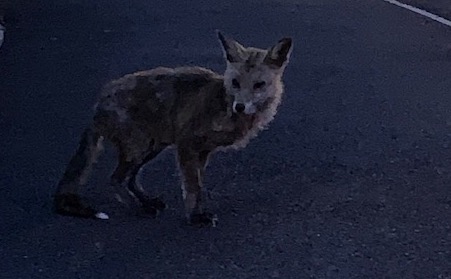 GG had a sleepover last night in the garden. Still no luck trapping him but at last it looks like the tablets are having an effect. In general he looks a lot brighter and there is some improvement in his coat.

fox in a bic, fox in a box, Fox mange, fox trap, Help for foxes, save the fox

Monday at the Hide , 8th August 2022 The start of another week and once again it’s a stunning summers day here in North Wiltshire. The temperature at the hide […]
MONDAY AT THE HIDE

I can’t believe it’s August already , where has 2022 gone. ( our local pub already has signs up for Christmas parties! ) Here are a few images from today […]
THE MEADOW

What a difference a week makes , gone are the ridiculous high temperature’s and in its place more traditional British weather. Sill the cooler condenser make for ideal bird watching […]
THE HIDE

Yellowhammer  , Emberiza citrinella The Yellowhammer is a sparrow sized member of the Bunting family of birds. The male is mostly yellow with brown upperparts that have darker streaking. The rump […]
THE YELLOWHAMMER

Here are a few images from the Meadow hide……
THE HIDE

HOT IN THE MEADOW

Hot in the Meadow At long last , freedom. I have been confined to my home recently with Covid so it’s really great to get back out and about with […]
HOT IN THE MEADOW
Loading Comments...
%d bloggers like this: