Meet the Model – Suzy the Squirrel 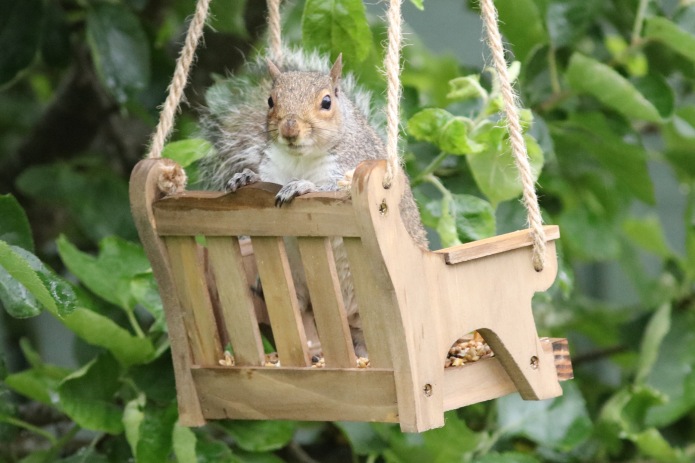 For some peoplle in the UK the grey squirrel is no more than vermin, a destructive pest and unwanted garden visitor. It’s also blamed for the demise of our own native Red Squirrel  , but for many people in the U.K. The grey squirrel is a welcome garden visitor. Intelligent and good at problem solving the “grey” is probably our best known wild mammals.

Agile and fast across open ground , this species comes alive in it’s true home , up in the trees. The ability to run both up and down tree trunks, jump from branch to branch makes the grey  a firm favourite. Easy to recognise with it’s long busy tail, short muzzle and rounded ears the grey is both bigger and heavier that it’s native Red cousin. Squirrels are diurnal, with peak activity during early morning and late afternoon. They don’t hibernate but do become less active during the winter months.

The Grey Squirrel was introduced to the UK buy wealthy landowners from North American between 1876 and 1929 , originally as a decorative addition to their country estates. Since then it has spread over much of England and Wales and much of southern Scotland , pushing back the Red Squirrel into smaller pockets of land in England and the Highlands in Scotland.

Adult male squirrels compete to mate with suitable females , and the female will mate with multiple males during the estrus period. The gestation period is about 44 days , when the female gives birth to a litter of between 1-4 pups. The young are born in a nest or “Drey” similar to a birds nest but made from twigs cut live from the host tree, often with leaves still attached. Newborn squirrels are entirely hairless and pink , weigh between 13-18 grams and are born blind. The young are weaned at around 10 weeks old and leave the nest after around 12 weeks. Only 25% will survive the first year to reach maturity. A squirrel can live up to 20 years in captivity , but in the wild average life expectancy is around six years.

Squirrels cannot digest cellulose , a compound found in most green plants. They rely on a diet of protein, carbohydrates and fats, primarily nuts, seeds, fruit, fungi and conifer cones. During hard times squirrels have occasionally been known to eat insects, eggs and small birds. Squirrels start to stash away surplus nuts in autumn when there is plentiful food supply , burying nuts in small holes in soft earth, returning later during winter to retrieve their stored food supply. A squirrel can even sniff out stored nuts under a layer of snow.

The Grey Squirrel has few natural predators in the UK. This has helped it’s rapid population growth. The Grey Squirrel is responsible for the displacement of our native Red Squirrels. One of the main factors is that the Grey tends to be larger and stronger than it’s Red cousin and can therefore compete for a larger share of the available food, resulting in a lower survival rate for the Red.

Another factor is disease, the Grey can carry the Parapox virus, and while the Grey is unaffected by this disease it’s fatal for Red Squirrels. There have been cases of Red Squirrels developing some immunity to the virus but it has still had a massive affect on Red Squirrel numbers.

Grey Squirrel numbers have increased since their introduction from North America. The Grey has little protection in Law and is considered a serious pest by the forestry industry. It’s illegal to keep Grey Squirrels unless you have the appropriate licence. It’s also illegal to release the Grey Squirrel into the wild.

Description:     Grey coat with touches of white, round ears with no tufts 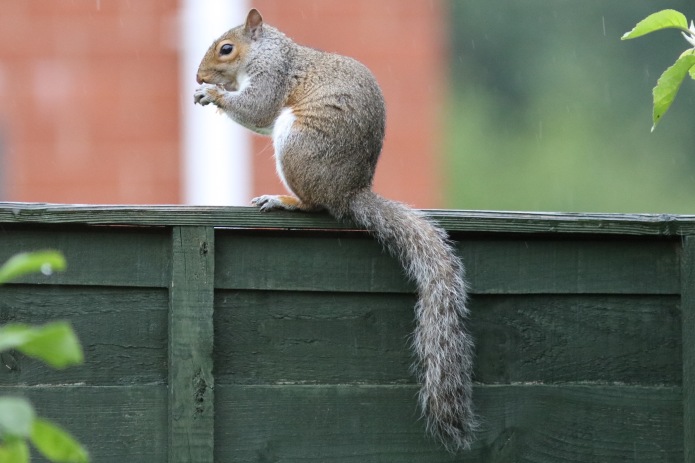 It’s Monday , and while we are now in a new month , lockdown for me still continues. Anyway list of domestic duties completed and ticked off so off I […]
WHO’S WATCHING WHO ?

May has been a busy old month here , despite the lockdown. Wildlife Wednesday has been a welcome distraction and has turned up a few surprises, the commute has been […]
MAY

So far so good. Here is a short video of Paws , a regular visitor to our garden. She’s not in good shape and has a really bad case of […]
PAWS

For the third night in a row now we have managed to get Paws to eat the medically dosed food left out for her. I say her because so far […]
PAWS
%d bloggers like this: